Bitcoin has been a great start for blockchain cryptocurrency technologies, but that’s just an eye opener for several technologies to emerge.

Ethereum has proven itself to be a next generation technology with Smart Contracts, DAOs (Decentralized Autonomous Organisations), blockchain security on Decentralised Applications. I could go on and on but it’s worthy of note that OpenAPIs would soon be the new SOA.

Slock.it is a blockchain venture just like the bitcoin project built on Ethereum network. 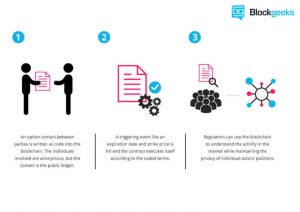 Smart contract is just a phrase used to describe computer code that can facilitate the exchange of money, content, property, shares, or anything of value. When running on the blockchain a smart contract becomes like a self-operating computer program that automatically executes when specific conditions are met.

While all blockchains have the ability to process code, most are severely limited. Ethereum is different. Rather than giving a set of limited operations, Ethereum allows developers to create whatever operations they want. This means developers can build thousands of different applications that go way beyond anything we have seen before.

Ethereum’s core innovation, the Ethereum Virtual Machine (EVM) is a Turing complete software that runs on the Ethereum network. It enables anyone to run any program, regardless of the programming language given enough time and memory. The Ethereum Virtual Machine makes the process of creating blockchain applications much easier and efficient than ever before. Instead of having to build an entirely original blockchain for each new application, Ethereum enables the development of potentially thousands of different applications all on one platform.

Ethereum can also be used to build Decentralized Autonomous Organizations (DAO). A DAO is fully autonomous, decentralized organization with no single leader. DAO’s are run by programming code, on a collection of smart contracts written on the Ethereum blockchain. The code is designed to replace the rules and structure of a traditional organization, eliminating the need for people and centralized control. A DAO is owned by everyone who purchases tokens, but instead of each token equating to equity shares & ownership, tokens act as contributions that give people voting rights.

Bruno Otakhogbogie is the Founder and Board Chairman of XtraDot Technologies LLC, incorporated in 2011, even though he had earned a reputation from several innovative IT ventures since 2003. A graduate of Production Engineering, University of Benin; his core flair has been in Operations Research (OR) which has been evident in his approach to problem solving and creative consulting. His programming and design skills are unconventional, with profound understanding of several languages including Python, C, VBasic, Ruby, Java, PHP, amongst others. His advise has been sought by industry leaders both in Finance and in the IT industry.